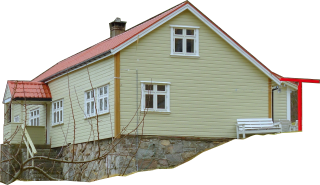 Flørli was first inhabited around 1620 as a clearing under the farms of Kalleli, the next village along the fjord. Reason to settle here was not the great soil. Rather the river was used for a waterpowered sawmill. Timber was in high demand at the time and the fjord was full of oak forest – more and thicker than today. Timber was exported to Scotland or Holland and local taxes to city authorities were also paid in planks.

Most likely, the first housing was constructed on this spot, as it is slightly flatter than the rest of the village. In 1708, legend has it there was a widow living here with a young herdsman. A huge rockslide then happened and she had to flee across the mountains to Kalleli at night. The herdsman may have died. After that, Flørli was deserted for almost hundred years until in 1802 again the farm was cleared. That’s when this farmhouse was constructed.

Farming in Flørli was mostly for sustainance and income was had through the sawmill and later through chipping square cobble stones in the quarry of Urnes. That’s probably why the farmers were quite happy to sell when Einar Meling came along in 1914. Descendants and relatives of the former farmers were offered work at the station and stayed in Flørli. This farmhouse was refurbished into two separate apartments. Since 1982 it is in use by the Stavanger Turistforening as one of their cabins.

Pictures show life at the summer farm (Norwegian: støl) in the 1930’s and the tripods used for lifting and manoeuvring heavy stones. 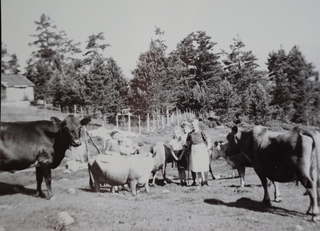 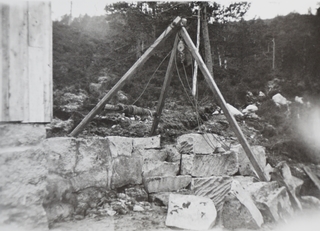 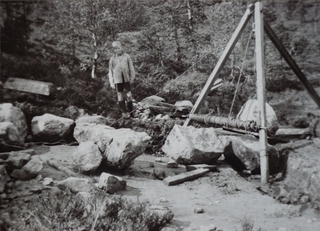